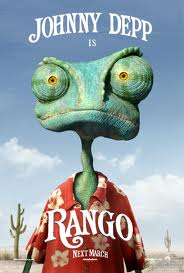 After two days of release the word on this movie has been pretty positive, in fact many of my friends on Twitter (especially @EthanRunt) have been praising this movie to the sky, so this definitely upped my interest in the film (I had not been won over by the trailers and Gore Verbinski rarely inspires that much hope for me). Lets just say the movie did not meet my expectations. We join a confused chameleon named Rango (Depp) on his quest to bring law to a frontier style town populated with animals.

END_OF_DOCUMENT_TOKEN_TO_BE_REPLACED

In Cinemas Now: The Adjustment Bureau, Rango and The Tempest

Another week and another crop of movies for me to dissect. Not a shabby looking week though, as we start off with the new Matt Damon sci-fi thriller The Adjustment Bureau. Damon stars as a politician who falls for a young ballerina (Emily Blunt) but supernatural forces are fighting to keep them apart. The film is based on a Phillip K. Dick novel and being a fan of Dick (lets just get that joke out of the way) I’m greatly anticipating this to be one of the early surprises of the year, I’m seeing it tonight and will probably have a review by tomorrow. Here’s the cool looking trailer after the jump.

END_OF_DOCUMENT_TOKEN_TO_BE_REPLACED

As a big fan of Empire’s last 3 Movie-Con’s I feel obliged to inform you about the new event they are holding, “Empire Presents Big Screen”. END_OF_DOCUMENT_TOKEN_TO_BE_REPLACED

Big week for releases here. Basically just a major catch-up with US, but there are definitely some interesting releases. So after showing us the best she can be in Black Swan, Natalie Portman now returns to our screens with the dull looking rom com No Strings Attached. Portman stars against one of my least favourite actors, Ashton Kutcher (Valentine’s Day) as two friends who decide to have consequence free sex. It looks to me like a When Harry Met Sally wannabe and I am far more interested in the similarly plotted Friends With Benefits which opens later this year, but I do have faith in Portman and with Ivan Reitman (Ghostbusters) behind the camera it can’t be all bad (then again he did make the atrocious My Super Ex-Girlfriend and Evolution). My hopes aren’t high but I do have a vague interest. Here are some clips for you guys to enjoy after the jump.

END_OF_DOCUMENT_TOKEN_TO_BE_REPLACED

What Happened To the Site?

You might notice that a few of the aritcles have suddenly disappeared.  I wanted to briefly address what’s happening with the site.  Occasionally, when you build a new website, you run into bugs.  Building ScreenGeeks UK has certainly been no exception.  I’m sure you noticed that when you clicked on the About page or tried to read all of Jack’s review of Age of the Dragons, you were just brought back to the main site.

I ended up having to rebuild the entire site from scratch in order to fix this, and it unfortunately reslted in losing some posts.  If you ask nice, Jack just might link you back to that Justin Bieber trailer.  We’re still tweaking the site, but we hope you enjoy it.

Film Review: Age of the Dragons

Why is it that when classic literature is adapted into a new setting it usually stinks unless it’s a teen film? Perhaps the melodramatic qualities of these tales will only translate well to a teenager. Age of the Dragons is a very loose adaptation of Herman Melville’s Moby Dick except this time Captain Ahab (Glover) isn’t chasing a white whale, he’s searching for a white dragon. The film follows Ahab’s newest crewmember Ishmael (Sevier) who witnesses his captain’s dissent into madness as he attempts to destroy the wretched beast.

END_OF_DOCUMENT_TOKEN_TO_BE_REPLACED

It May Be Amazing, But Haven’t We Seen It Before?

Yesterday Sony announced that the as of yet Untitled Spider-Man Reboot will now be known as The Amazing Spider-Man (which was actually a rumoured title for Spider-Man 2). They also released this image.

I’m very conflicted about The Amazing Spider-Man, I love the Sam Raimi trilogy,  that’s right I even dig on Spider-Man 3 to an extent, and I’m sad that we won’t see any expansion on that world. It also saddens me to think that every time a franchise takes a mis-step some studio exec is just going to say “REBOOT!” and we will be stuck in an endless loop of restarting franchises. Yet, a fresh idea on a beloved story is not all bad and I’m a big fan of both Andrew Garfield and Emma Stone, so the new Spidey does definitely hold some interest for me. The costume doesn’t sit well for me though, something about it seems to scream Scarlett Spider, but after seeing a dancing emo Peter Parker and going with it, I guess I’m open to anything.

He’s Jack, and He Kills Giants

Does anyone remember how awesome About a Boy was? I really loved it when it first came out, it was a fun, well written and heart warming rom com with Hugh Grant doing what he does best; being a git. But did we really think we’d see the titular boy again? Not really, he seemed pretty creepy and his eyebrows were weird, not your typical leading man material. Yet here we are, 9 years later and Nicholas Hoult has quite a career under his belt with an eclectic filmography spanning from indie Brit flicks like Kidulthood to big mega-blockbusters like X-Men: First Class, clearly the kid is going somewhere which is why I’m interested to hear that Bryan Singer (X-Men, Valkyrie) is considering Hoult for the lead in his skewed fairytale Jack the Giant Killer.

Very little is known about the project yet, though it does also boast cast members Stanley Tucci and Bill Nighy as the villains. Honestly I really like Singer (I am the only person who ever seems to defend Superman Returns), so I’m down for this, and to Hoult, I like him too, so the best of luck with this project.

So in case you haven’t been listening to my guest spots on ScreenGeeks US, I’m obsessed with Submarine, a small UK movie that played at the London Film Festival last year from director Richard Ayoade (The IT Crowd). Now as it is coming to cinemas March 18th a trailer has been released, watch and enjoy.

Film Review: Made in Taiwan

TweetWhether it’s Goodfellas, Atonement, Hunger or even Russian Ark, there’s something special about...